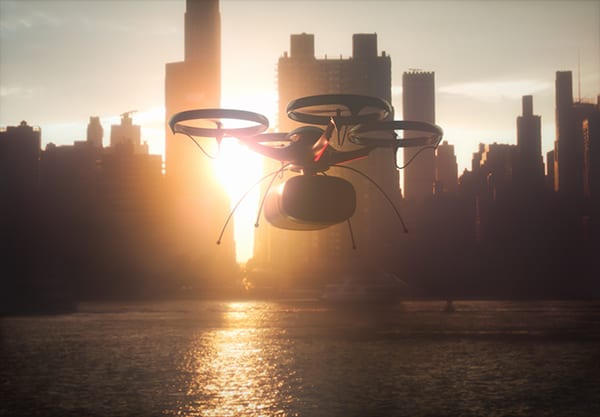 October 10th, 2018 Posted by Team Omnibeat Tools and Technology No Comment yet

A few years back, Jeff Bezos promised that Amazon would begin delivering packages by drone, and, at the time, everyone thought he was crazy. However, Bezos’ dream is becoming a reality with trials underway around the world. Drone delivery is not yet legal in the US and still has a way to go until it becomes entirely feasible, but there is a good chance drones will be delivering our packages in the near future. In this blog, we will discuss the history of drone delivery as well as the feasibility and future of this service for all companies – not just Amazon.

When you think of drone delivery you probably think of Amazon, but unmanned aerial vehicles (UAVs) have been around since 1918 when initially used by the US military. Commercial use of drones came to light in 2013, but gained popularity in 2015-2016 as only 2 permits were approved by the Federal Aviation Administration (FAA) in 2014 while 1000 were approved in 2015 and 3100 in 2016. Patents and investments have also skyrocketed in recent years with new drones and new companies taking advantage of this technology. The manufacturing for the drone market alone is predicated to be over $3.5 billion with growth expected in the coming years. Dominos was the first to successfully deliver using a drone after they delivered a pizza to a home in New Zealand in November 2016. Amazon completed a drone delivery through its Prime Air service in 2017 – delivering sunscreen in a small rural town in England. The drone delivery service has also been tested for delivering medical supplies to rural areas, but once again this has been on a small scale. Thus, while UAVs have been around for decades, the commercial use of drones for deliveries has not taken off yet but is poised for continued future expansion.

One major roadblock for drone feasibility was the Federal Aviation Administration regulations; however, the Trump administration opened up this door with an executive order that allowed delivery testing efforts for companies in the US. This was part of Trump’s plan to keep business in the US and allow technological innovation because companies like Amazon were taking their efforts to the U.K. However, this does not mean drones will be taking over any time soon. Drones are awesome, truly, but I think every drone lover will admit that the system is not error-proof as any strong gust of wind, tree branch, or aggressive bird can throw the drone off course. If this were to happen with a company like Amazon’s drones then a lawsuit would be waiting when the drone comes crashing down and hits a pedestrian or car – not to mention, I doubt Amazon would want to risk their expensive drone without getting it perfect. Additionally, these drones cannot fly long distances so there would have to be drone hubs in almost every major city in the world for this to be successful. There is also an entire issue with consumer acceptance as only 32% of US consumers believe drone deliveries will be safe as surveyed by the US Postal Service. Thus, drone delivery has massive potential and, if implemented, can have huge cost savings for companies like Amazon, but actual full implementation of drone delivery is likely not to come for a few years.

Companies Working to Make It Happen

Besides large companies like Amazon and Dominos, there are plenty of smaller startups also working to make drone deliveries feasible. One cool company is Matternet who uses stations to deliver small items and will begin being used commercially in Switzerland soon – you can check out their video below. Flirtey is another company making progress in the drone space, and, in fact they were the ones who partnered with Dominos to deliver that first pizza. These are just a few of many companies, but they help show that this space is becoming more and more crowded – something that will surely boost innovation. Additionally, these companies have their heads in the right place, as they both have a focus on using these drones for emergency deliveries such as medicine or whatever else it may be. If drone delivery were to be implemented successfully for medicine deliveries than the benefits and change these drones could bring would be unprecedented.

In all, the future of drone delivery has major potential for faster package deliveries but also medical emergency deliveries. Amazon and Jeff Bezos may claim that drone delivery can happen anytime in the near future, but between consumer restraint, regulation, and economic feasibility there are very low odds that this is the case. Instead, we like to look at drone delivery as automated driving – it is being done on a small scale, such as Tesla with its cars, but there is still a lot stopping it from being implemented on a large scale.