If you have not heard about Bitcoin by now, then you must be living under a rock. Bitcoin is a new “cryptocurrency” that is looking to replace our current use of fiat currencies and completely alter the way we do business. In this blog, we are going to look deeper into Bitcoin – looking at the technology behind it and the recent price surge you have surely heard about.

A Brief Description of Bitcoin

Bitcoin is a form of cryptocurrency, or digital currency, that allows peer-to-peer online payments. Because the transactions are peer-to-peer, cryptocurrency and Bitcoin transactions can take place without a central authority or government. The problem in the past with digital currencies was making sure nobody spent the same money more than once, and Bitcoin’s technology solves this. Bitcoin keeps track of transactions through “blockchain”, which is basically a digital ledger that is on every Bitcoin user’s computer; in other words, every transaction that has ever happened with Bitcoin is recorded in the Bitcoin itself. This means that you cannot cheat the system and send Bitcoin twice or say you sent something when you did not because Bitcoin is controlled by everybody – not just one central authority. Another problem Bitcoin hoped to solve was the issue with central banks being able to print unlimited money, thus, there is a set number, 21 million, of Bitcoin that can and ever will exist to stop inflation from occurring. Currently, there are almost 17 million of the 21 in circulation, but there are Bitcoin “miners” working on supercomputers to unlock the rest of these Bitcoins. At first, Bitcoins were easy to mine and almost anyone could do it on any regular computer, but now it takes supercomputers and massive amounts of energy to mine Bitcoin – and it will only continue to get harder as more are discovered. In fact, one estimate suggests the Bitcoin network consumes as much energy as the entire country of Denmark.

So, the Bitcoin technology sounds awesome right? Now you are probably wondering what you can do with Bitcoin and the answer is: almost nothing. Bitcoin can be used as a transfer of money; however, the only people really using Bitcoin in this way are doing so for illegal activity. For example, Bitcoin is very popular for buying Fake IDs or drugs because the government cannot track these transactions – at least not at the moment. Despite this limited use, the price of bitcoin has been surging over the past year (as seen below). The growth has been truly exponential as it took 1,789 days to go from $0 to $1,000 but only 3 minutes to go from $18,000 to $19,000 and gained $6,000 in 12 hours in early December. Thus, it begs the question: if there is limited use for Bitcoin, why is its price surging? The answer lies within Bitcoin’s future potential. People believe Bitcoin can someday be worth hundreds of thousands or millions of dollars, which means even at a price of $19,000 it is relatively cheap to its future worth. On top of this, Bitcoin futures recently began trading on financial exchanges giving it widespread accessibility and popularity. Basically, this all adds up to Bitcoin’s price increasing by 1,700% this year – in other words, a hugged missed opportunity for those of us who did not invest in Bitcoin. 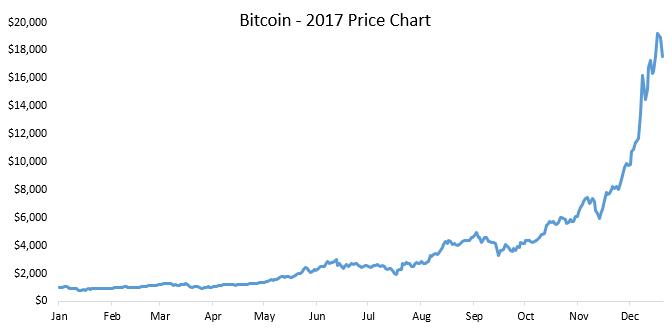 There you have it – an oversimplified, yet still incredibly complicated, explanation of Bitcoin and cryptocurrencies! The technology behind Bitcoin and has the potential to be revolutionary, but we cannot say this supports its recent price movement. People are losing their minds over Bitcoin like they first did for the Internet or like Tulip Mania in the 17th century. If you want to learn more about Bitcoin you can read more online – there are countless articles – and if you want to know more about the future potential of Bitcoin and how to buy it then stay tuned because that is what our next blog is going to tell you!